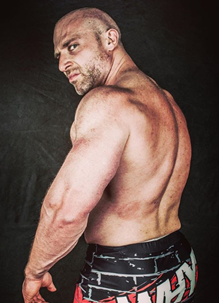 The first thing it’s important to know about Simon Miller is that people warm to him very quickly. That’s one of the main reasons he’s able to create content on any one of several different topics and still have a large number of the same people watch it.

Simon Miller is most well known for his work in wrestling, more specifically with Whatculture Wrestling on Youtube. He also works as a wrestler on the British independent scene. Simon is starting to see some fantastic growth on his own Youtube driven by his expertise and never ending work ethic. It’s exciting to watch him find his niche and grow in that field.

One of the best things about the content that Simon creates is that he’s passionate about it and that resonates in video form. He can create content on wrestling in one post, weightlifting in the next then switch over to the boy band BTS and bring the exact same level of expertise in each video.

Do you want to work with Simon or find out more about his demographics for your potential campaign? Contact us! If you want to see our other exclusive influencers then check out the page. Remember, we also offer an influencer marketing consultancy for roles that might require other social influencers.